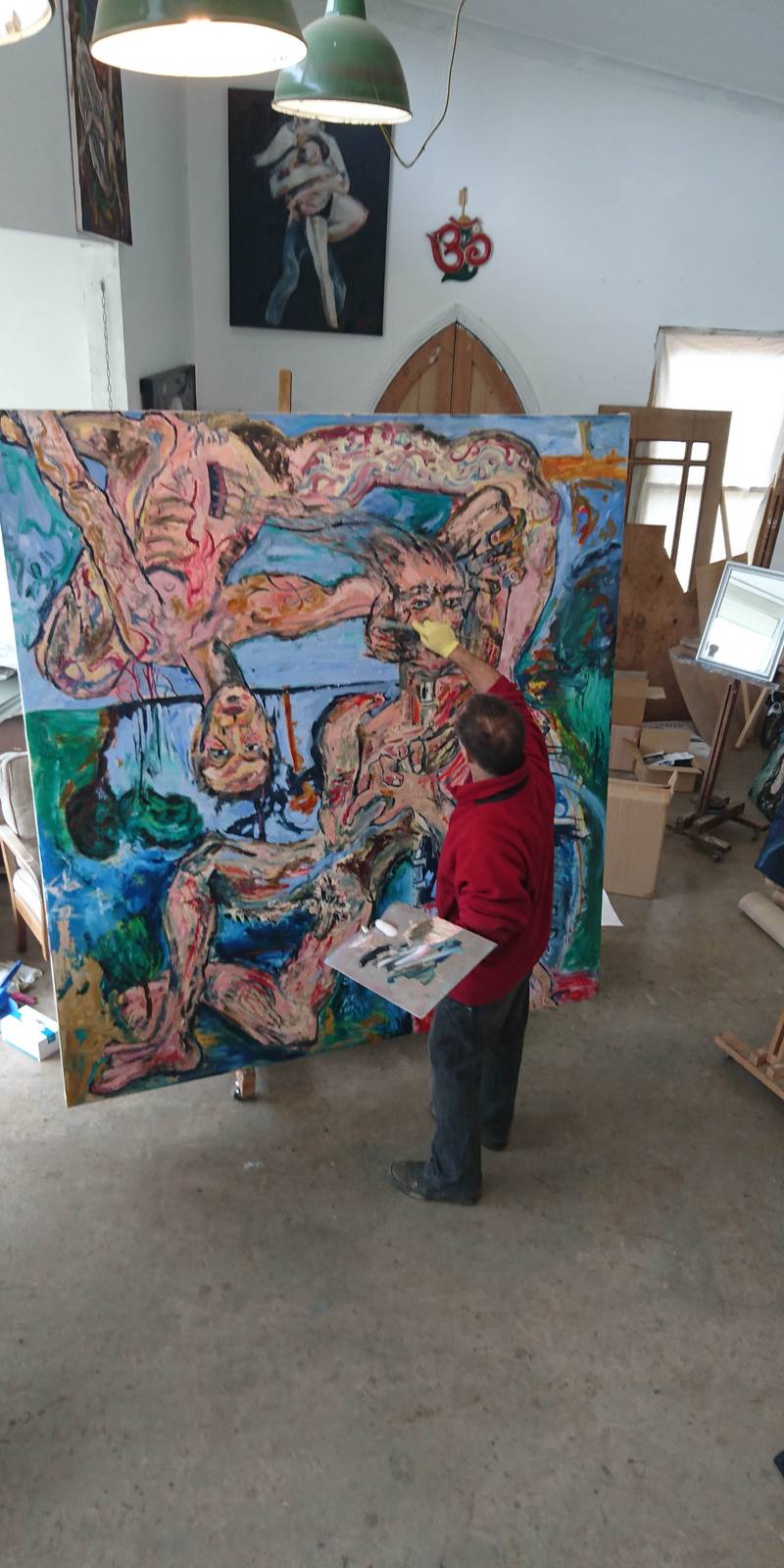 My work explores energy and constructs and is primarily expressionist.

Created and published The Men’s Deck

A tool for men (and women) to use to facilitate access to their physical, mental, emotional, and energetic bodies. Used by counsellors, men’s (and women’s!) groups, families, partners, parents and children in the UK, Europe, USA, and Australia

Took a group of teenagers to Mongolia.

Cement mythical creature made with Gr 6. (see side image)

Dr Suess’ Cat in the Hat with huge marionettes and luminous paint! 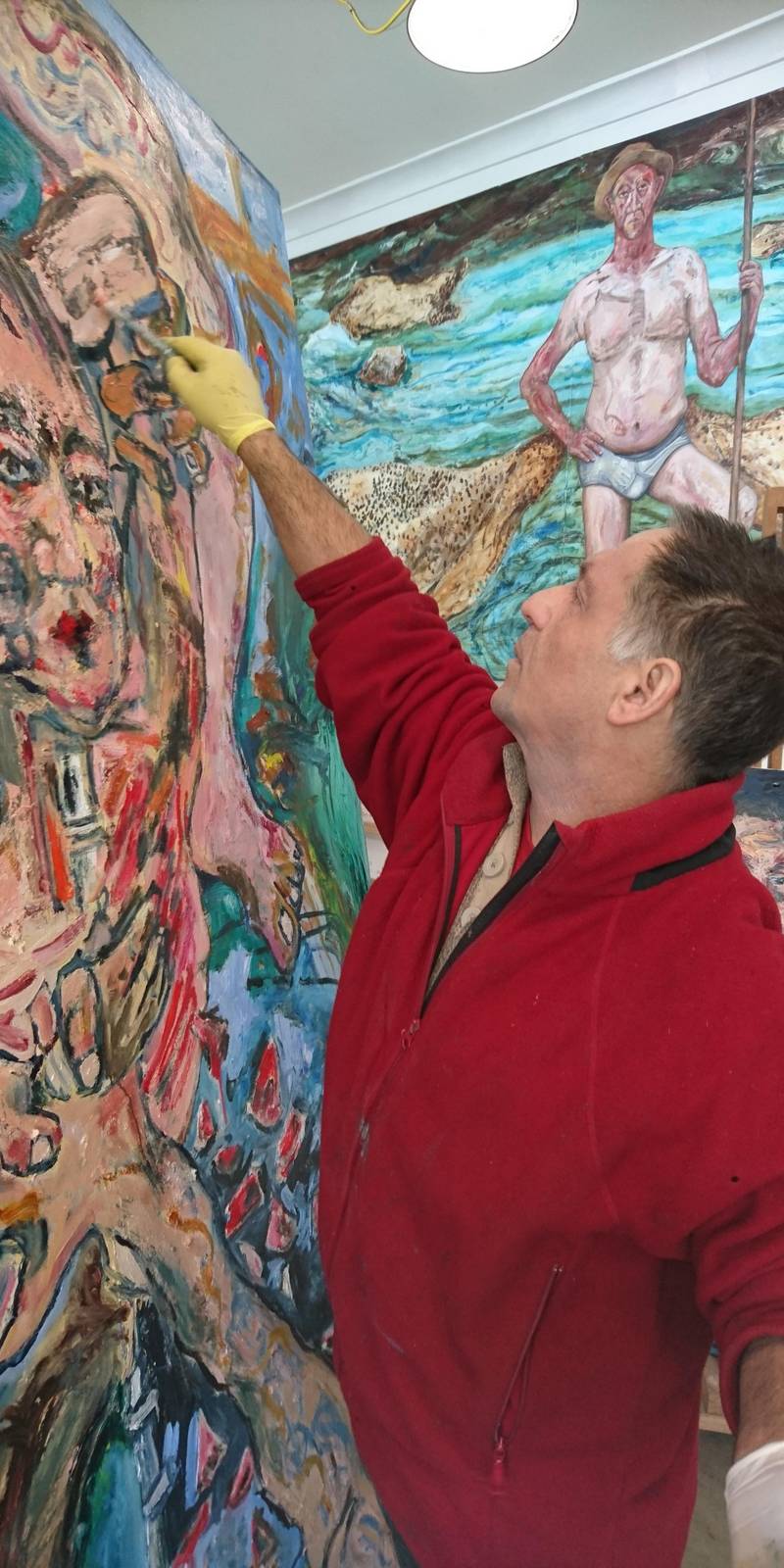 ‘Basil Eliades writes huge thoughts contained in delicious language… This guy is offering us everything. This is heroic poetry.’ John Marsden.

Core contributor to the opening of Candlebark ‘One of the most anticipated openings of a new school… in 30 years’, The Age, Feb 6, 2006.

Launched at Parliament House, Dec 7, on time and under budget. This
$50 000 Community Arts project used 350 students and adults across the Moorabool and Hepburn Shires to create two huge embroidered ‘Snakes and Ladders’ games to educate community groups about issues of inclusion and exclusion facing people with disabilities. The games challenge values systems and paradigms through a unique set of situations and questions. With Jane Knight.

Curriculum design and documentation for Candlebark

Lectures and workshops for university and TAFE students throughout the period.

The campus is residential for eight -week blocks, and educates ‘the whole person in the community’. The campus is widely considered to be the “cutting edge’ of education for adolescents.
Duties included: curriculum development and implementation, staff professional development, running workshops and teaching experientially: visual and performing arts, philosophy, mediation, inter-personal skills, cooking.

Contributed to the overall development, curriculum, and ethos of the campus.

Set up a culture of Art and Literature as integral to life-long learning, including major group-devised projects and contributions of individual excellence.

Sessional lectures, workshops, and tutorials, presented at schools and universities throughout Melbourne and Victoria, interstate, and overseas. Local examples include:

Many talks, lectures and workshops throughout Victoria as Key Speaker for the ‘Kicking Goals’ program

Contributed energy and vitality to many learning institutions, highlighting the value of Liberal Arts.
Motivated many individuals to pursue writing, drawing, and philosophy as a means of exploring their worlds.
Stimulated on-going discussion both in and out of the institutions regarding the Arts and Philosophy.

Bachelor of Fine Art (Victorian College of the Arts) 1987

Who’s Looking at You

Up to our waste in it

Bacchus on the Beach

3rd i  or  within the contingent skin,Interactive Press, Brisbane,2006

A number of other ghost-written books published

PBS – live radio interview and reading Arts About 25 May 1995

Many recent articles, radio and TV coverage of the opening of Candlebark
Many articles on the Snakes and Ladders Project

The art of art as a statement

Hands on work at Wesley

Poet-painter has arrived in town

Big Ron’s about to be framed, Spy

The Best Of Sunday

English, Swedish, French, some Greek, Italian, Chinese, and ‘can I borrow your pen?’ in Mongolian…